You are here: Home / Uncategorized / How to Stay Safe on Public Wi-Fi 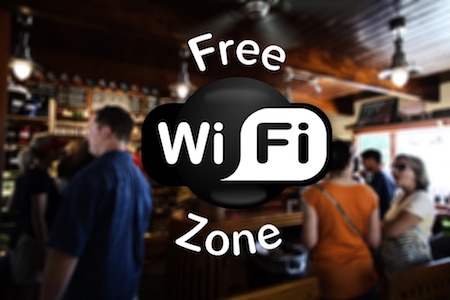 Protecting yourself when using public Wi-Fi is important. I talked about this in a previous blog, but I felt that it is such an important topic that I’m giving you more information. Thanks to my friends at TurnOnVPN, who wrote this guest post. After reading this post, I would also encourage you to visit their website for even more information…

Corporate professionals who are frequent travelers must be well-acquainted with free public Wi-Fi at airports and stations, but many might not be aware of the cybersecurity risks of free Wi-Fi on both the individual and the company’s confidential communication.

Before connecting to most public Wi-Fi networks, you are usually required to agree to some terms and conditions. That is the only hurdle to overcome before connecting, so most people tend to ignore them out of eagerness to get online.

But if you take the time to glance through a couple of sentences, you will understand why your data might not be secure once you’re logged in. In fact, the owners themselves know that their connections may be wildly unsafe and try to warn you so that they are not held responsible for whatever happens after.

You don’t have to take my word for it. We can pick a few examples of businesses offering free Wi-Fi to the public and see what their policies are.
Starting with Suddenlink, they state of their Wi-Fi zones in the US that “You acknowledge that the [Wi-Fi] service is inherently not secure and that wireless communications can be intercepted by equipment and software designed for that purpose.”

If that is not explicit enough, consider what Tim Hortons – a revered coffee chain from Canada – has to say. I It’s stated in their privacy policy highlights that they collect user data through available sources such as their in-restaurant Wi-Fi, and data includes your IP address, your interaction with content through their internet service, your location information and more.

Matters are not even helped when we move on to the likes of Arqiva. You should note that this is a company dedicated to fitting the lounges of airports with a Wi-Fi network and would be expected to have the best tech in the game. Surprisingly, they admit “the transmission of information via the internet and via the service is not secure.”

I can go on and on, but I believe you get the idea. Even if every other data I provide might not convince you, hearing it from the providers should set some bells ringing.

As if all of the above were no reason for worry, another threat comes in the form of the network operators. Apparently, you could still be susceptible to internet privacy breaches even if the network were tightened against external attacks.

Again, the companies who give their customers free Wi-Fi don’t hide this. It is yet another common feature in their terms and agreements.

The Puerto Rico District Court says of its own Wi-Fi network that “all communications over the [Wi-Fi] service may be subject to monitoring and should not be considered either private or protected.” Coming from a court of law, isn’t that rather ironic?

Little wonder then that other firms can do the same. After all, Virgin Media holds the right “to monitor and control data volume,” while the guys over at the Oscars can also “monitor and collect information while you are connected to the [Wi-Fi] service.”

If you have not already started picking up on it, the biggest problem with using free public Wi-Fi connections is in the way of data leak. How does this happen?

How you can protect yourself better

There isn’t supposed to be any harm in just being able to enjoy your free Wi-Fi connection in peace. With a number of unscrupulous individuals hunting your sensitive data though, that is not the case.

The ideal thing to do would be to stick to your own data plans and do away with the free Wi-Fi in the first place. If that is not an option, downloading a quality VPN on your iPhone is highly recommended.

A VPN will allow you to connect like always. The difference is just that you would be using a different server to send hackers on the wrong trail. That is not to mention being able to better mask data you send over the otherwise insecure network, since the transmitted data between your device and the VPN server is encrypted.

With such procedures in place, you can keep enjoying your coffee shop freebie without having to worry about losing your bank login details – or some other important data – to some snooper.

Thanks again to TurnOnVPN for the great information, and if you use public Wi-Fi, be aware of and minimize the risks before you connect!